On April 26, UNIST and Ulsan City officially announced that their ambitious 10,000 Genome Project has finally reached the milestone of sequencing 10,000 whole genomes. On this day, they also held a declaration ceremony to commemorate the successful completion of the Ulsan 10,000 Genome Project, which was initiated in 2016 as part of the Genome Korea in Ulsan Project launched in 2015.

The Ulsan 10,000 Genome Project is Korea’s first large-scale public project, which is somewhat similar to the UK’s 100,000 Genomes Project. The primary goal of this project is to map the complete genomic diversity of Koreans, by constructing reference database of genomic variation, detecting rare genetic mutations, and providing well-annotated full genome information for Korea’s growing genomics industry.

As of April 2021, the Ulsan 10,000 Genome Project had completed the sequencing of 100,044 whole genomes, including 5,300 patients and 4,700 healthy individuals in Ulsan. More than 18 billion won has been spent on this pan-national genome-based research project. 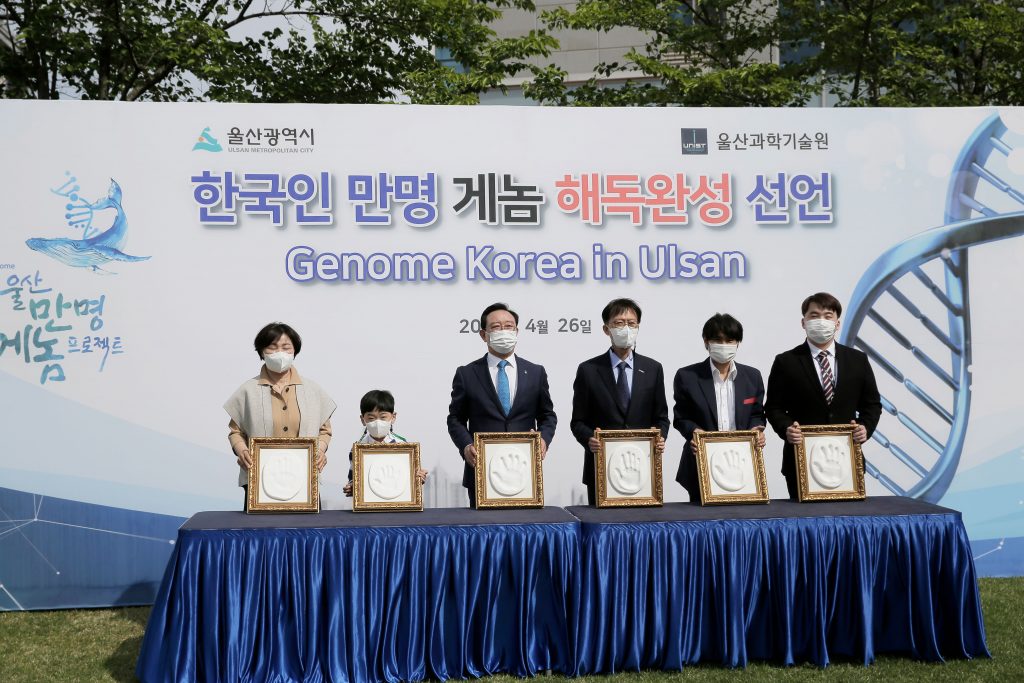 Participants also partook in a handprint event to commemorate the successful completion of Ulsan 10K Genome Project at the declaration ceremony.

Korea 10K has great value as a standard gene-mutation data set for Koreans, since it can be used for multi-omics data analysis, the key factor supporting growth of the next-generation sequencing market. In this project, multi-omics data, such as genomics, proteomics, metabolomics, and transcriptomics, along with clinical data have been established comprehensively. This will further allow doctors and researchers to develop new treatments for patients with rare diseases or genetic disorders.

The Korea Genomics Center (KOGIC) at UNIST has worked hard and established ultra-rugged, high-performance, computing system and large-capacity storage space for the analysis of large-scale genome information. Besides, with the recent improvements in its own big data analytics technology, the initial sequencing and analyses of thousands of human genomes are currently underway through automated pipelines. The research team has also attracted much attention from academia and industry for publishing a comprehensive WGS analysis of 1094 Koreans (Korea 1K) in an internationally-renowned journal, Science Advances, in May 2020. The genomic data of 1,000 individuals has been distributed to 23 domestic and overseas research institutes, such as UK MRC Center, Cambridge, UC Berkeley, UCLA, Seoul National University, Yonsei University Medical School, and KAIST, for research use. The Korea 10K will help accelerate the commercialization of genomic research in Korea through the Ulsan Genome Service Industry Regulation-Free Special Zone.

Wearable Robotics for Assistive and Rehabilit